According to a promotional flyer handed out at Borders Books stores in advance of Nazanin‘s visits, she is on a mission to “speak out for those who cannot” and stands against “senseless child executions in Iran.”  Nazanin also takes credit for the release of a woman from death row in Iran.  Fair enough.  But Nazanin’s “human rights” buddies, Reza Pahlavi and Abbas Fakhravar, collaborate with the militarist mass executioners nested in Washington, and Nazanin remains silent about that.

Marketing her glamorous self as a brand name synonymous with human rights, Nazanin’s lyrics and interviews beckon us to “a new solution . . . a progressive revolution” that promises “a rainbow at the end of the road.”  But the minute one unbundles the slick sales pitch, her utopia rings hollow, not to mention blood-soaked.

Having roamed the globe (as a child of privilege) for humanitarian photo ops, is Nazanin unaware that thousands of women and children are executed every year as “collateral damage” by American bombs and missiles?  Even people who rarely leave their neighborhood and get their news from mainstream Western sources are outraged about Iraqi, Somali, Afghan, Palestinian, and other victims of imperial terrorism.  Why isn’t Nazanin?

Is she unaware that Fakhravar is mentored by Richard Perle, who played a key role in imposing sanctions and war on Iraq that killed 500,000 children from 1991 to 2002 (UNICEF figures) and hundreds of thousands more since the invasion?  Are the millions worldwide whose lives are cut short for lack of health care and nutrition by US-imposed “free market” low wages less “executed” than her adopted Iranian victims?

Nazanin actually answers these questions — implicitly — in her new CD, wistfully titled Someday.  Depicting her chosen narrow version of “freedom,” background images in the album highlight the tanks in Tiananmen Square and the fall of the Berlin Wall, favorite tools of propagandists whose monument to the victims of Communism was unveiled in Washington last week.  Ignored in Nazanin’s fantasy world are the mass murders and ethnic cleansing committed by the US and its allies.

While millions of Americans and her fellow Canadians helplessly scream their opposition to Washington’s kidnappings and secret detentions, Guantanamo, Abu Ghreib, and other American global torture chambers, and the US genocide in Iraq TODAY, Nazanin diverts our attention to the crimes of America’s adversaries decades ago.  It makes one wonder who is behind Nazanin’s US tour.  I think they are the same “idealists” who made Azar Nafisi‘s Reading Lolita in Tehran and, before that the film and book versions of Not without My Daughter, commercial successes. 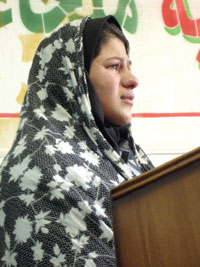 Speaking of profits, isn’t the Iranian woman whose release from death row is central to Nazanin’s fame entitled to some of the revenue her CD will generate?  What about the dedicated defense team who, according to most observers in Iran, should get the most  credit for the happy ending?  If Nazanin’s double dealing as an admirer of Nelson Mandela (featured in the CD promotions) who also embraces friends of mass executioners is any indication, she will keep all the royalties.  Besides, acknowledging the ability of Muslim Middle Eastern peoples to overcome injustice (such as a wrongful death sentence) without outside help would render an aspiring savior like her useless.