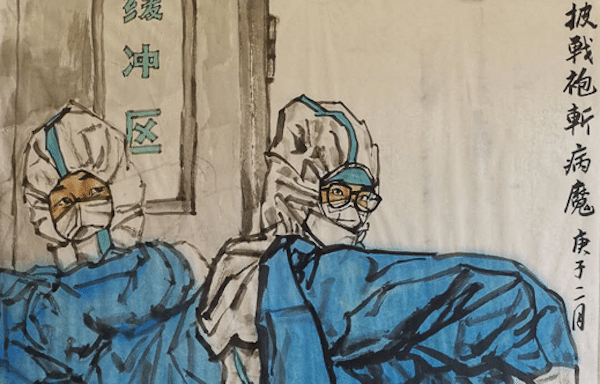 Li Zhong, Medical workers putting on their gowns to fight the ‘evil’ virus, 2020.

On 30 June 1958, Mao Tse-tung read in Renmin Ribao (People’s Daily) that schistosomiasis–or bilharzia–had been eradicated in Yukiang (Jiangxi Province). He was so inspired that he wrote a poem called ‘Farewell to the God of Plague’:

We ask the God of Plague, ‘Where are you bound?’
Paper barges aflame and candlelight illuminate the sky.

Mao grew up in Shaoshan (Hunan Province), where he knew intimately the terrors of bilharzia and the punctual plagues that wracked rural China for hundreds of years. Shi Daonan (1765-1792), who was killed by the plague, wrote the powerful ‘Death of Rats’: 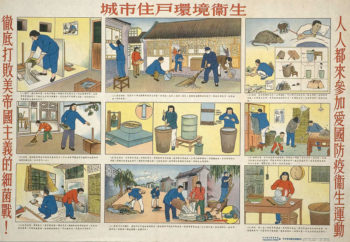 The Communists were determined to eradicate disease. In the 1930s, Mao joined the Chinese Communist Party’s Public Health Commission; in 1934, when he was in the Jiangxi Soviet, Mao placed public health at the top of the list for party work. When the Communists were in Yan’an, their government allocated an impressive 6 percent of their budget to health care, which was the responsibility of the committee of public health. The old wretched neglect of social life for the hundreds of millions of people had to be reversed; it would require not only the seizure of state power but also the summoning of public action. 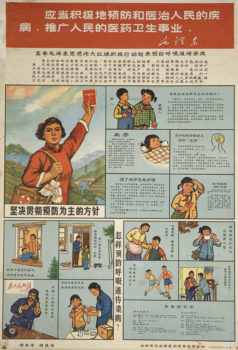 In March 1952, the Communist Party created an epidemic prevention committee and launched the Patriotic Public Health Campaign. Encephalomyelitis, malaria, measles, typhoid, and bilharzia were largely controlled or eradicated. The campaign would eventually be the basis for the 1978 Alma Ata Declaration for Primary Health Care; on 5 July 2017, the World Health Organisation (WHO) presented the Chinese government with the Outstanding Model Award for Health Governance for that campaign.

Old diseases of plague and cholera have largely been overcome in China thanks to the improvement in the standard of living; but new ailments have arrived, and some of these have been devastating. The novel coronavirus is one of these, and it has been the author of the Great Lockdown. The first real evidence of the virus came to the doctors of Wuhan in late December; they reported it to their hospital administrators, who then told their national health commissions; within days, the Chinese government informed the World Health Organization. Weeks into the outbreak, the government shut down Hubei Province, including the city of Wuhan, and mobilised both state resources and public action to break the chain of infection. The four principles from the 1950 National Health Congress were in evidence as China fought the virus. 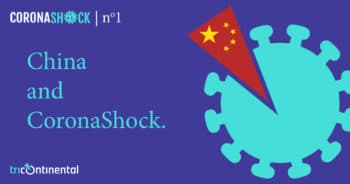 The WHO warned the world of the lethality of the virus in early January and declared a public emergency on 30 January. On that day, U.S. President Trump said, ‘we think we have it very well under control’. The governments of the bourgeois order flailed about, their champions–like Trump and Brazil’s Jair Bolsonaro–basing their decisions on the hallucinations of fantasy rather than the cold-hard facts of science. Right through January, February, and March, Trump minimised the threat. His twitter feed provides all the necessary evidence. On 9 March, Trump likened the virus to the common flu; ‘Think about that!’, he wrote. Two days later, the WHO declared a global pandemic. On 13 March, Trump declared a national emergency; this was six weeks after the WHO had declared a public emergency.

And yet, Trump enflamed a dangerous reaction to the crisis–he decided to blame China (and the WHO) for the crisis rather than the lethal virus or the collapse of state institutions in the North Atlantic states and the incompetence of their governments.

My colleagues Weiyan Zhu, Du Xiaojun, and I closely researched how the Chinese authorities learned about the virus, how information about the virus went to the WHO and to the world, and how the Chinese were able to break the chain of infection. Our research, based largely on Chinese sources, provides an antidote to the Sinophobia of Trump and the other governments of the bourgeois order. Central to our analysis is the concept of CoronaShock. This is a term that refers to how a virus struck the world with such gripping force; it refers to how the social order in the bourgeois state crumbled, while the social order in the socialist parts of the world appeared more resilient.

Abdallah El Harif, a leader of Democratic Way (Morocco), spoke to me this week about CoronaShock.

What does COVID-19 teach us?

COVID-19 reveals the failure of capitalism; the big capitalist countries–especially the United States, Italy, France, and Spain–have been unable to face the global pandemic. They put the interests of capital before the lives of people. There is a loss of credibility of the political systems of the bourgeois states: they have failed to save people, and then are forcing the people to finance their response with public funds and not by taxes on the richest. Following neoliberal policy, these governments dismantled public health care and condemned their populations to the virus. Not only this, but the virus has shown the moral collapse of capitalism; evidence for this was the criminal way that they have abandoned the elderly and deepened blockades against Cuba, Iran, and Venezuela (including refusing to allow Venezuela access to IMF aid packages).

What is your sense of the Chinese response to the virus?

China was able to defeat the virus because the government took quick, efficient, and appropriate measures. They mobilised resources because they considered human lives as their priority. The strong Chinese public health system–which is oriented to serve the people–played a key role. China and Cuba taught us about solidarity and internationalism as they sent medical teams around the world to fight the virus.

We are now witnessing the consolidation of a bipolar system. There is the U.S. pole, which is rooted in military force, the imposition of the dollar as the world currency, the U.S. control of the organisation of the global economy and finance, and so on. On the other side, the rising pole is represented by China, which is based on a strong, sovereign, and yet open economy. The Chinese do not have military ambitions, and they do not launch wars against other people; they respect international law and strike commercial–not imperialist–deals with other countries. The U.S. pole sees the deterioration of its hegemony, and so it is lashing out at China. The aims of a government such as Trump’s is to divert domestic opinion from its own crimes in dealing with the pandemic by putting the blame on China.

What is your hope for the future?

Humanity is at a crossroads: either we chose barbarism or cooperation and solidarity. The scientific and technological revolution enormously developed the productive forces; it has created the basis for all people to be able to live with dignity, but this is squandered by the immoral accumulation of wealth by a few capitalists. We fight to put human beings at the centre, not capital. This requires building political power of all forces that oppose imperialism and that wish to build a superior human civilisation that guarantees the development of the capacities of all human beings. 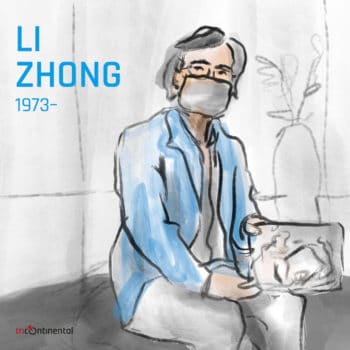 In a recent conversation with me, the revolutionary musician Roger Waters–of Pink Floyd–mirrored what Abdallah Harif said about the dilemma humanity faces: either barbarism or cooperation. ‘We can only move forward and save this fragile planet that we call home’, he said, ‘if we co-operate with one another, rather than fight one another.

Li Zhong, a painter in Shanghai, made 129 watercolours during his one-and-a-half-month quarantine in honour of the workers and people of Wuhan–more than two each day. His paintings adorn our booklet on China and the CoronaShock (which you can read here). Tings Chak, our lead designer, met with Li Zhong in Shanghai; their conversation is printed at the end of the booklet. What should artists do? Tings asked Li Zhong. ‘They can reflect the situation positively’, he said. ‘They should be true. Don’t blame other countries or spread misinformation, because the biggest challenge is to defeat the virus, which requires our unity’.