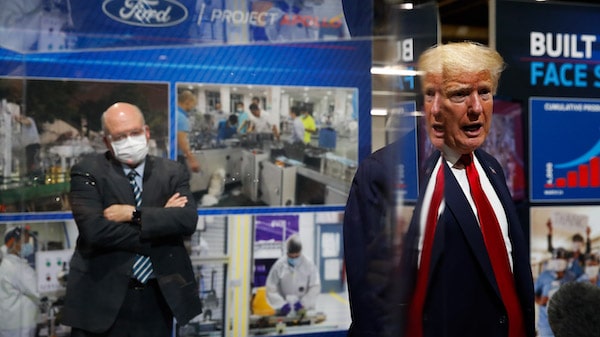 President Donald Trump speaks as he tours Ford’s Rawsonville Components Plant that has been converted to making personal protection and medical equipment, Thursday, May 21, 2020, in Ypsilanti, Mich. (AP Photo/Alex Brandon)

A new poll published yesterday by the Pew Research Center found that Americans rate their government’s response to the COVID-19 pandemic as better than China’s. This is despite the United States having 20 times the number of infections and deaths as the Asian nation, the epicenter of the outbreak. Unlike Chinese authorities, the Trump administration had months of notice to formulate a response. Overall, 47 percent of Americans judged the Trump administration’s reaction as either good or excellent, compared to 33 percent for China’s.

While China is reopening safely, there is no end in sight for the United States, where the virus is still running rampant. There were 28,179 confirmed new U.S. cases of COVID-19 yesterday, more than the worst week of the outbreak across China, a country with well over four times the population. Despite this, Americans appear to believe this could be the end for China as a power; 50 percent claimed that it would have less power on the world stage after the outbreak, compared to just 17 percent who said they would have more.

The poll also found a great deal of public mistrust or resentment towards Beijing, with 84 percent of respondents saying that Beijing’s poor response has led them to question any information about the virus from the Chinese government. Yet by December 31, Beijing had already warned the world about a new outbreak, an alarm some countries chose to heed, but Trump dismissed as a liberal “hoax,” promising in February that coronavirus would be gone from the U.S. by April.

The poll also found that Americans hold some questionable views about other countries’ responses. For example, a plurality (49 percent) felt that the United Kingdom had done a good or excellent job in their response (the U.K. has the second highest fatality totals in the world), and respondents also rated Italy’s handling of the situation as better than China’s. Both the U.K. and Italy have a death rate of almost double the U.S., and nearly 200 times that of China, per capita. 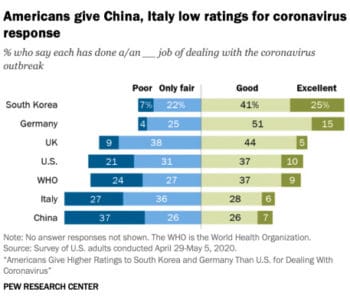 China has been the subject of an intense propaganda campaign of late, with politicians and corporate media alike blaming Beijing for the U.S.’ woes. Conservative figures, in particular, insist on calling COVID-19 the “Chinese Wuhan Virus,” not-so-subtly reminding those listening who is supposed to be at fault. Only three years ago, the Pew Research Center found that Americans had a neutral view of China (and nine years ago it was strongly favorable). Today, 66 percent of Americans dislike China, with only a quarter holding a positive opinion of the country.

President Trump has also escalated Obama’s aggressive posturing towards Beijing, suggesting last week that he might “cut off” all trade with China. “Now, if you did, what would happen? You’d save $500 billion,” he told Fox Business, referring to the United States’ trade deficit with the Asian nation. The Pentagon’s 2021 war budget is also specifically directed at China, arguing for a massive realignment of forces from the Middle to the Far East. Military planners are advising on conducting a huge psychological war, similar to the Cold War against the U.S.S.R. In 2017, former Trump advisor Steve Bannon said the U.S. would, without a doubt, be at war in the South China Sea within ten years. Signs are increasingly pointing in that direction.

The Pew poll also found that U.S. exceptionalism is still alive and well, with a plurality of 42 percent of Americans thinking that the country spends too much time and effort “helping solve the world’s problems.” It is far from clear whether the rest of the world sees what the U.S. does to it as “helping.” Indeed, a 2014 WIN/Gallup global poll found that the United States was overwhelmingly considered the greatest threat to world peace. Pakistan was a distant second, with only a third of the votes the U.S. got (a result almost certainly buoyed by a large Indian sampling). In December, Pew found that a majority of Mexicans view the United States as the greatest threat to their country when asked to pick from the 195 countries in the world.

Pew’s research highlights the gulf between perception and reality in the United States, and underlines the power of the media and other powerful groups to rapidly shape public opinion, inculcating citizens with ideas not necessarily congruent with reality.

As of Friday, there have been 5.23 million confirmed positive COVID-19 cases and 335,631 reported deaths worldwide, including 1.61 million positive tests and 95,087 fatalities in the United States.