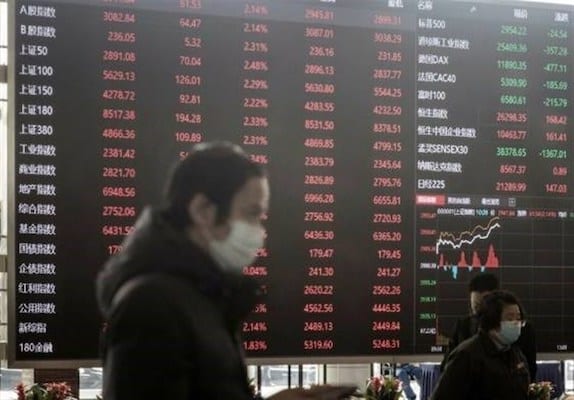 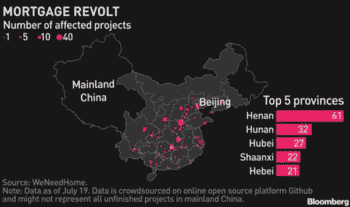 Once again, Western ‘experts’ are predicting a financial crash in China.  “China is flailing”, says one commentator; another says “a debt bomb is about to explode”. These would-be Cassandras reckon China’s demise will be driven by the bursting of the property bubble, excessive debt and the grinding down of the economy due to the government’s “terrible” ‘zero-COVID’ policy that keeps parts of the country in permanent lockdowns. And then of course, there are the growing restrictions on China’s exports and its investments abroad, imposed by the U.S. and supposedly backed by its allies in Asia.

How much truth is there in this latest batch of critiques on China’s economic progress? The property crisis has reached dangerous levels. Last year, Evergrande, China’s second-largest private property developer was close to bankruptcy. The Evergrande property model is essentially a Ponzi scheme, where the company collects cash from the pre-sale of an ever-growing number of apartments, plus hundreds of thousands of individual investors and uses the cash to fund further sales by accelerating construction in progress and funding down-payments. Like any Ponzi, this works as long as it’s accelerating. But when the market slows, those incoming streams of cash start to fall behind the growing arc of cash demands. Evergrande now has about 800 unfinished projects and there are about 1.2 million people waiting to move in.

Now the property crisis has reached the point where millions of Chinese purchasers have stopped paying their upfront mortgage payments. Chinese homebuyers’ rapidly escalating boycotts on mortgage payments have spread across at least 301 projects in about 91 cities, with the value of mortgages that could be affected swelling to an estimated 2 trillion yuan ($297 billion). About 70% of household wealth in China is invested in real estate. Some Chinese banks have responded by seizing purchasers’ savings deposits, claiming they are really ‘mortgage investment products’. This has sparked open protests outside some banks, leading to the government surrounding the banks with tanks.

At the same time, China’s usually stupendous annual growth in real GDP has been sliding, even before the COVID slump in 2020. While recovery was strong in 2021, new bouts of COVID variants have caused new lockdowns. The Chinese government has been hugely successful in its policy of zero COVID, keeping the death rate down to miniscule levels compared with the major capitalist economies. But economic growth and employment have taken a hit as a result.

The Chinese economy shrank by a seasonally adjusted 2.6% quarter on quarter in the three months to June 2022. The nationwide urban survey-based unemployment rate eased only to 5.9% in May, with the unemployment rate for the 16-24 age group rising to an elevated 18.4%. It is increasingly clear that the government’s target real GDP growth rate of 5%-plus is not going to be met this year. And remember this target has been reduced over the last few years, as the double-digit annual expansion of the last decade has disappeared.

So, is this the moment of collapse in the Chinese model of development and the end of all that talk about ‘moving towards socialism’ etc? Many Western experts think so. What will cause this collapse, in their view, is the failure of the Chinese leaders to ‘liberalise’ the economy and open it up even more to capitalist companies and markets. Time to stop ‘zero COVID’ and relax restrictions as ‘successfully done’ (sic!) in the West. In effect, China needs more capitalism. It needs to expand the private sector.

But wait a moment. What are the causes of the current property crisis and the debt expansion? It can be laid squarely at the door of China’s expanding private sector, as promoted by a sizeable section of the Chinese leadership, particularly in the finance and property sectors. 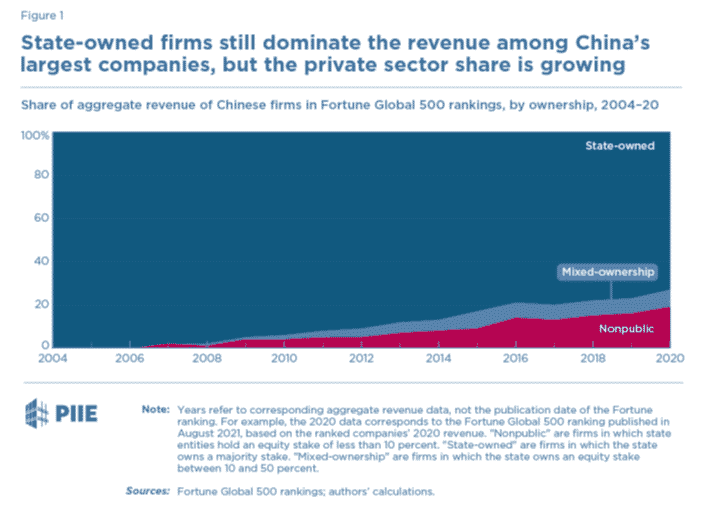 Increasingly, China’s investment expansion has been in unproductive sectors like finance and real estate. Why in China, of all countries, was home building in the burgeoning cities left to private capital developers offering mortgages to buy? Why were homes not built by the state sector for rent? The result has been a classic case of a Western property market crash that the state now has to clear up. This will have to be resolved by the state (local governments) finishing off projects and restoring the rights of mortgagees to their money. 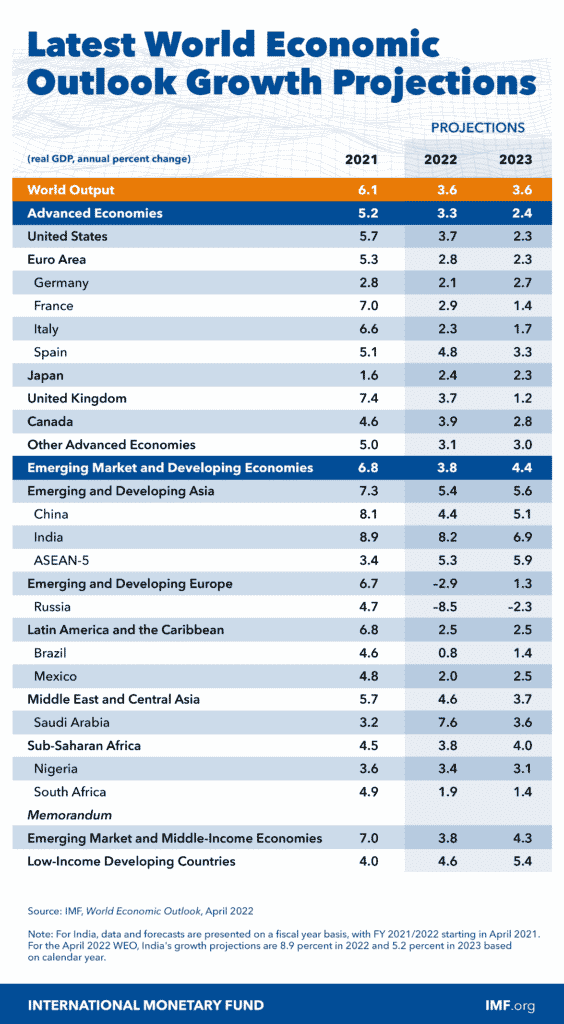 There is not going to be a financial crash in China. That’s because the government controls the financial levers of power: the central bank, the big four state-owned commercial banks which are the largest banks in the world, and the so-called ‘bad banks’, which absorb bad loans, big asset managers, most of the largest companies. The government can order the big four banks to exchange defaulted loans for equity stakes and forget them. It can tell the central bank, the People’s Bank of China, to do whatever it takes. It can tell state-owned asset managers and pension funds to buy shares and bonds to prop up prices and to fund companies. It can tell the state bad banks to buy bad debt from commercial banks. It can get local governments to take up the property projects to completion. So a financial crisis is ruled out because the state controls the banking system.

But the current property mess is a signal that the Chinese economy is becoming more influenced by the chaos and vagaries of the profit-based sector. It is the private sector that has been doing badly during COVID and after. Just one small example: COVID lockdowns in Shanghai were out-sourced to the private sector with poor results; in Beijing, local government did the job directly with much more success.

Profits in the capitalist sector have been falling. Profits earned by China’s industrial firms increased only by 1% yoy to CNY 34.41 trillion in January-May 2022, slowing from a 3.5% rise in the prior period, as high raw material prices and supply chain disruptions due to COVID-19 curbs continued to squeeze margins and disrupted factory activity. Profits at state-owned industrial firms rose 9.8%; while those in the private sector fell 2.2%. Only the state sector is continuing to deliver. This is what happened in the global financial crisis of 2008-9, which China avoided by expanding state investment to replace a ‘flailing’ capitalist sector. What Xi and the Chinese leaders have called the “disorderly expansion of capital”.

The capitalist sector has been increasing its size and influence in China, alongside the slowdown in real GDP growth, investment and employment, even under Xi. A recent study found that China’s private sector has grown not only in absolute terms but also as a proportion of the country’s largest companies, as measured by revenue or (for listed ones) by market value, from a very low level when President Xi was confirmed as the next top leader in 2010 to a significant share today. SOEs still dominate among the largest companies by revenue, but their preeminence is eroding.

Far from the answer to China’s mini-crisis requiring more ‘liberalising’ reforms towards capitalism, China needs to reverse the expansion of the private sector and introduce more effective plans for state investment, but this time with the democratic participation of the Chinese people in the process; not by tanks outside banks. Otherwise, the aims of the leadership for ‘common prosperity’ will be just talk. 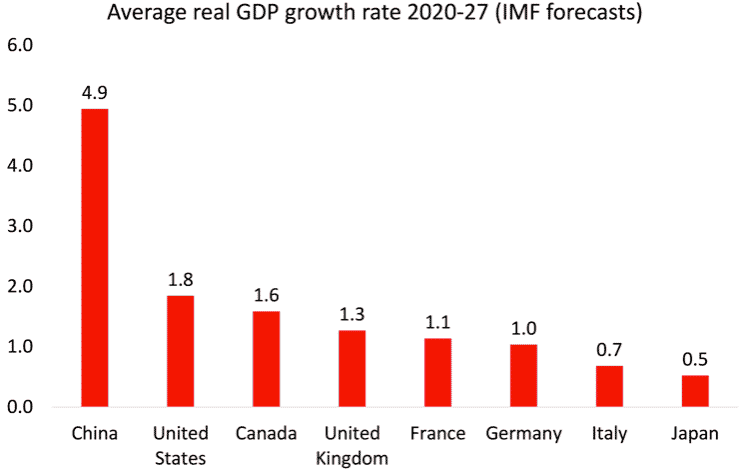 Having said all this, it is still the case that the public sector-dominated Chinese economy is and will do better than those in the West, the G7 economies. Here are the latest IMF forecasts for growth in the major economies.

Even this year, if China only manages around 4% real GDP growth, that would still be faster than any growth rate in the G7 economies. And the IMF forecasts that China will grow at 5%-plus in 2023, while G7 economies will be lucky to manage half that rate, assuming there is no new global slump. Indeed, longer term, the IMF forecasts that China will grow at a subdued rate of 5% a year, but that rate would more than twice as fast as the U.S., and more than four times as fast as the rest of the G7. 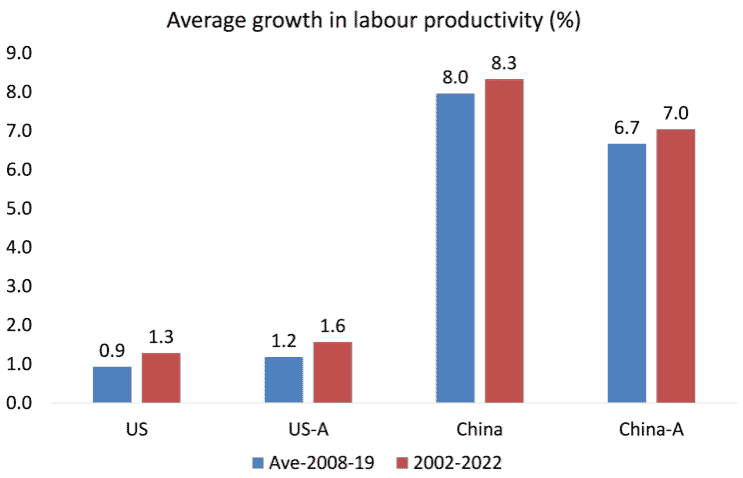 I have discussed at length in previous posts the claim by Western experts that China’s falling working-age population and its slowing productivity growth rate mean that it will begin to fail. These arguments are weak and faulty. Indeed, even on the adjusted (A) Western measures of labour productivity growth during the COVID period, China did way better than the ‘dynamic’ USA.

Indeed, the forecasts (and hopes) of the Western experts that China is about to melt down are clearly not agreed with by the strategists of capital in the U.S. and NATO. They do not expect internal disintegration and so continue to try and strangle China’s economy externally.