All the leaders and many of the active members of the Maruti Suzuki Workers Union (MSWU) — arbitrarily held responsible for the violent 18 July 2012 incident in the Manesar works of Maruti Suzuki India Ltd in the province of Haryana — 148 of them, repeatedly denied bail, are in jail since August of that […] 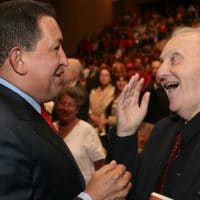 Mr. István Mészáros, you are coming to visit Brazil to talk about György Lukács.  As a profound expert of the work of the philosopher, how do you evaluate the importance of his ideas today? György Lukács was my great teacher and friend for twenty-two years, until he died in 1971.  He started publishing as a […]

Samuel Grove [SG]: For a while now you’ve been working on and defending the old idea of ‘the will of the people’, and you’ve described it in terms of a ‘dialectical voluntarism’; what do you mean by this? Peter Hallward [PH]: I’m not stuck on the terminology, and I’m leery of the way these […]

I. On Thursday, June 27th, fast food workers gathered outside City Hall in New York before a hearing on low wages and wage theft.  Some of the workers described to the reporters of the New York Times the difficulty of living on minimum wage, $7.25 per hour in the state of New York.  One worker, […]

The following comments were made at a panel on the topic “Sexual Taboos and the Law Today” May 19 at a conference titled “Which Way Forward for Psychoanalysis?” and sponsored by the Society for Psychoanalytic Inquiry at the University of Chicago.  While Freud and psychoanalysis were a focus on the event, other themes running throughout […]

Russia, as travelers have noted over the centuries, is immense.  Most of it is far from large bodies of water.  And yet, in a first visit after many years, I came upon some unusual islands right in the heart of the country.  But they were not islands in the geographic sense.  Some were children’s islands. […]

The official death toll from the April collapse of the Rana Plaza building in Dhaka, Bangladesh, which housed clothing factories, has now passed 1,100.  How exactly will the staggering costs of that overwhelming tragedy be figured?  Will they count as part of capitalism’s contribution to economic development across Asia, Africa, and Latin America? In capitalism’s […]

New York, N.Y., 2018 — Every year about this time, since way back in 2013, the City of New York has bestowed its prestigious Hashmi Award upon a worthy New York resident who lives openly as an observant Muslim.  The Hashmi recipient — preferably of Asian, Middle Eastern, or African descent — must have paid […]

Labor historians Marcus Rediker and Peter Linebaugh have vividly described how sailors and other maritime workers were in the vanguard of the creation of an international working class.  Unlike most people in the early modern period who largely stayed rooted to the soil of their birth or tied closely to their particular artisanal enterprises, Jack […]

Rebekah Wetmore and Ryan Romard (RW/RR): The crisis of world capitalism starting in 2007 was the most severe crisis of capitalism since the Great Depression and thus far the recovery, both globally and within Canada, has been weak at best.  With this mind, to what extent is the current crisis cyclical and in what […]

Centennials, bicentennials, and other historical anniversaries — not to mention annual holidays — play a major role in the legitimation of power relations.  And they can be sharp ideological battlegrounds like Columbus Day.  This year is the two hundredth anniversary of the War of 1812, an inconclusive two and a half-year war with Great Britain […]

In the celebrated section of The Wealth of Nations in which he discusses the advantages of the division of labor, Adam Smith advances the thesis that “common to all men” is a “propensity to truck, barter, and exchange one thing for another.”  Smith hedges on whether this “propensity” is a matter of original human nature […]

Dr Issa Chaer is a member of the Syrian Social Club (based in England). Carlos Martinez: Thanks very much for agreeing to be interviewed.  You have been very active in spreading information about the Syria conflict.  Can you explain why you have chosen to give so much time and energy to this cause? Issa Chaer: […]

My voice is a crime, My thoughts anarchy, Because I do not sing to their tunes, I do not carry them on my shoulders. — Cherabandaraju, who was the lead accused in a “conspiracy case” involving poets and their poetry. It’s been two decades and a year since India’s elite embraced neo-liberalism.  Money — the […]

(For Justin Hero Cassell) I heard a foolish man say the other day that everything of interest on the island of Montserrat can be seen in two days.  I kept my own counsel and did not talk of either his mother or his lineage.  But the truth is this, friend: It takes a week at […]

Ammar Waqqaf is an independent Syrian political analyst based in England. Q: Why do you think the western powers are so keen to see regime change in Syria? A: Western powers would be fools not to exploit such an opportunity to turn a key regional player from an opposing side into an allied one.  Achieving […]

And so I left Montserrat, a place of brief and merciful funerals.  She does a good burial, Montserrat — the only place in the world where the barefoot gravedigger rules.  He gets to choose the hymns sung, judge the quality of the choir’s voices, and keeps up a running conversation as he joyfully sets about […]

I recently wrote an article about my personal experiences in dealing with the medical system while undergoing surgery (“Free Market Medicine: A Personal Account”).  In response, a number of readers sent me accounts of their own experiences trying to get well in America. Health care in this country is hailed by conservative boosters as “the […]

In a 1956 interview with Anna Louise Strong, Mao described American imperialism as a paper tiger.  Of course, the military strength of the United States is unparalleled, especially because this country accounts for about half of worldwide military spending.  Even so, the last three significant wars have shown that the country has been unable to […]

The Occupy Wall Street uprising has taken the nation by storm, beginning in the Financial District in Manhattan and then spreading to cities and towns in every part of the country and around the world.  The anger over growing inequality and the political power of the rich that has been bubbling under the surface for […]