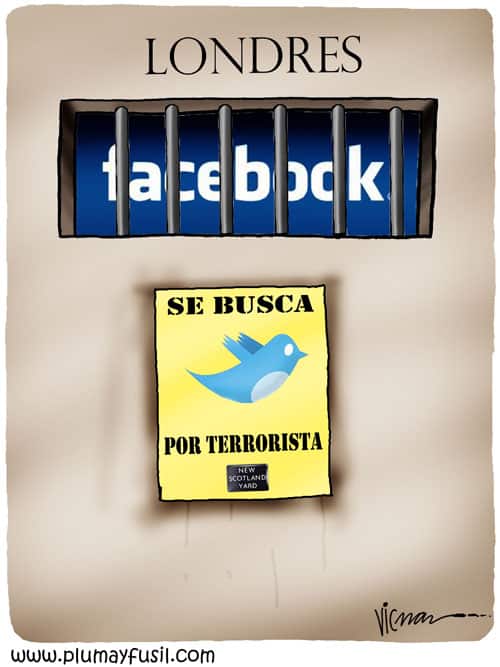 Victor Nieto is a cartoonist in Venezuela.  His cartoons frequently appear in Aporrea and Rebelión among other sites.  Translation by Yoshie Furuhashi (@yoshiefuruhashi | yoshie.furuhashi [at] gmail.com).  Cf. “David Cameron Back Councils Planning to Evict Rioters” (BBC, 12 August 2011); “[F]or the press and the western governments, those demonstrating in British, Greek, Spanish or Italian streets during these days of economic and social debacles are bandits, nonconformists and useless people. . . .  Meanwhile, counter-revolutionary groups with shelter and support in the U.S. or those acting from within Cuba in favor of foreign interests are ‘patriots’, ‘fighters for freedom’, or ‘defendants of citizens’ rights’, and therefore, their integrity is unquestionable. . . . They also think of as ‘heroes’ those paid by Washington to destroy the Nicaraguan Revolution, the Angolan mercenary groups, or the current ‘opposition’ in Syria and Libya” (Nestor Nuñez, “Media War, a Change of Outfit,” Radio Rebelde, 16 August 2011); “#Syria #BBC someone jailed for 4 yrs in the #UK for calling for riots but yet OK if done in #Syria?!?  Hypocrites go to hell #williamJhague” (Abood Ali, 17 August 2011); “The courts are handing down prison sentences to convicted rioters that are on average 25% longer than normal. . . .  The Guardian’s data also shows that 56 defendants of the 80 who have already been sentenced by magistrates were given immediate prison terms.  This 70% rate of imprisonment compares with a ‘normal’ rate of just 2% in magistrates courts” (Alan Travis and Simon Rogers, “Revealed: The Full Picture of Sentences Handed Down to Rioters,” Guardian, 18 August 2011); Robert Stevens, “Youth Sentenced to Years in Jail for Posting Facebook Notices during British Riots” (WSWS.org, 18 August 2011).