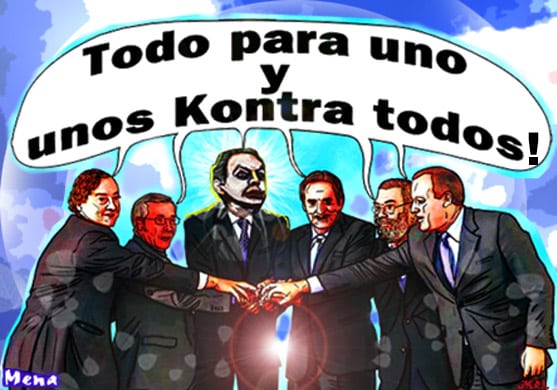 All for One and a Few against All

Cf. “Prime Minister José Luis Rodríguez Zapatero and the highest leaders of trade unions and employers signed . . . at the Moncloa Palace the economic and social accord to face the crisis.  The photo of the pact, featuring the six “musketeers” joining their hands, was shot before the arrival . . . of German Chancellor Angela Merkel, coming to evaluate the reforms carried out by the government.  The accord . . . hinges on the pension reform. . . .  The pact was signed by Zapatero himself, Labor and Immigration Minister Valeriano Gómez, Spanish Confederation of Business Organizations (CEOE) President Juan Rosell, Spanish Confederation of Small and Medium-sized Enterprises (Cepyme) President Jesús Terciado, and the secretaries general of the Trade Union Confederation of Workers’ Commissions (CCOO) and of the General Union of Workers (UGT) Ignacio Fernández Toxo and Cándido Méndez respectively” (“Todos a una para recibir a ‘Frau’ Merkel,” La Voz Libre, 3 February 2011).

Juan Kalvellido is a Spanish cartoonist.  This cartoon was first published in Kaos en la Red on 4 February 2011; it is reproduced here for non-profit educational purposes.  Translation by Yoshie Furuhashi (@yoshiefuruhashi | yoshie.furuhashi [at] gmail.com).  Cf. Kalvellido, “Spain: The State of Dis-Unions” (MRZine, 30 January 2011).