As an American, I have always taken pride in the words “White House.”  Through decades of political strife, be it hurricanes, bra-burnings, race riots, or terrorist attack, the White House has stood as a beacon of hope, assuring us that somewhere inside is a white President, upholding American values.  Until today, Mr. Bush.  Today, I read that headline in the New York Times, the one you were hoping I would not read: “White House Says Terror Detainees Hold Basic Rights.”

BASIC rights?  Basic RIGHTS?  You just got into a teensy little plane there, Mr. President, and flew it smack into America’s gut.  I mean, I knew letting Laura Bush wear pantsuits would lead to harder stuff — but this?

Mr. Bush, I ask with all due respect: Are you some type of Communist?

Don’t you know “Basic Rights” is exactly how Osama bin Laden wants you to think?  Don’t you see how dangerous it is for you to say that the “people” you’ve thrown into your squalid, brutal camps deserve decent food, treatment, and living conditions?  That they are actual human beings with feelings and ethics, who might, in fact, be innocent until proven guilty?

I can just see Osama in a cave someplace, rubbing his hands together and muttering, “Good, it’s working.  Now, if I can just get the entire populations of Iraq, Lebanon, and the Gaza Strip into US detention camps, the fantastically stupid Americans will at last give them Basic Rights — thus empowering me to destroy Western Civilization, BWHA-HA-HA!!!”

Lest we forget: God does not want Muslims to destroy the world, Mr. President.  God wants Christians to do that for themselves.

And what do you think the terrorists in these camps are saying, now that you’ve foisted Basic Rights on them?

“Gee, I hope the millions of Americans without Basic Rights won’t get jealous of me”?

“Thank you, Mr. President, for allowing 27 of my jailers to realize that they have a sadistic personality disorder and need immediate psychiatric help”?

No.  They are lost.  They are confused.  Up to now, you had them thinking it was OK to stand on a box with bags over their heads, holding electric wires until their vital organs gave out — but you’ve taken that away from them.

How, for instance, did those judges find out about Common Article 3 of the Geneva Conventions, prohibiting “humiliating and degrading treatment” of prisoners?  Who steered five of them to that passage requiring trials to afford “all the judicial guarantees which are recognized as indispensable by civilized peoples”?  And while we’re at it, who told Geneva it was OK to hold conventions???  It makes me sick to think of you kowtowing to a bunch of over-literate justice wonks all dressed up in their sissy black robes, like the nine grim reapers of the Apocalypse. 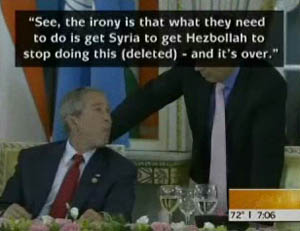 Speaking of death: Sooner or later we all have to learn that life is not one big frat party, Mr. Bush.  You won’t always be around to make vulgar comments at G8 Summits, thinking your microphone is turned off.  Someday that great Judge in the Sky — Judge Jesus, who hears all vulgar comments — will turn off your mike for good.  Are you ready?

Will you be able to tell Judge Jesus that you abided by the words “Under God” in our Pledge of Allegiance — the words so wisely added in 1954, when Osama bin Laden was but a terror-twinkle in the eye of one of your dad’s future business associates?  “Under,” means obeying God, who commands us to Do Unto Others Before They Do It To You.  We don’t call it the Golden Rule for nothing, Mr. Bush.  Can you tell your Maker you followed that Order, or will you be forced to admit you were shamed into loving the scum of the earth as yourself?

I was talking to God the other day, Mr. Bush, and He happened to mention that this whole mess started when you began calling America’s heartland states “Red.”  God says He never told you to do that.  Think, Mr. President. Historically, Red stands for everything you’re against: organized labor; anti-capitalism; equal opportunity; the sovereignty of nations; that crappy Warren Beatty movie; and . . . BASIC RIGHTS.  This is where I think you are confused.

It’s Liberty and Justice for us, Mr. Bush — not them.  By giving terrorists Basic Rights, you have, in effect, turned our American government into a bunch of Reds.  Why, just yesterday, I saw Dick Cheney on the news, and could have sworn I was looking into the face of Joseph Stalin.

It’s not too late, Mr. President.  Unlike Soviet Russia, we have Constitutional checks and balances to handle this type thing.  The legislative, executive, and judicial branches are sort of like the rock, scissors, and paper of our democracy.  If the paper does something you don’t like, you simply get the rock and the scissors to slash and smash it to death.  I hope you get my meaning.  You know, Mr. Bush, that Stalin guy couldn’t have been wrong all the time.