Come ye, O Light in the Loafer.  Come ye, O Friend of Dorothy.  Ye conservative homosexuals who looked to the Democrats and were rebuked by their lurid liberal election gains.  Ye right-thinking rump-rangers who looked to the Republicans, only to be scorned as left-leaning “queers.”  Ye passing-for-straight poofs who turned in despair to the preacher Ted Haggard, only to see him rebuked and scorned by anybody of any political faith.  Come and be healed of your deep — I say DEEP — pain.

Ted Haggard is dying for your sins.  Pastor Ted — founder of the 14,000-member New Life mega-church in Colorado and leader of the 30,000,000-member National Association of Evangelicals — has been exposed as a sin-soaked sodomite.  He cowers in his nakedness, revealed and reviled in the wanton glare of heterosexual media.

Once, Pastor Ted had a plan.  His plan was to promote Colorado’s electoral ban on gay marriage.  That would allow him to keep paying good collection-plate money to a male prostitute, lie to his wife and five children, and go on monthly drug-snorting and fudge-packing binges.  Pastor Ted thought he was on the Down-Low.  He thought, “With my position as pastor and evangelical leader, I — a Caucasian — am setting new Down-Low standards for all races to follow.”

Now, Pastor Ted is going to hell.  Why?  Because he is a homosexual?  Because he lied?  NO!  Because Pastor Ted did not truly accept the Down-Low into his heart as his personal Savior.

After Pastor Ted was called out by his own depraved callboy, he sat down and wrote a letter to his church.  He said:

“There is a part of my life that is so repulsive and dark that I’ve been warring against it all of my adult life.”

Pastor Ted outed that “repulsive,” “dark” part of himself.  In so doing, he ‘buked and scorned the Down-Low, friends.  He heeded not the Call to redemption.

Listen.  Do you hear the Down-Low calling you?  It’s saying, “Yoo-hoo, honey.  Behold thyself — Art thou not ashamed?”  It’s saying, “Throw down your crutches of self-respect and step into my eternal Closet.”

There is healing in that Closet, my friends.  There, in the midst of shame, you will find power everlasting.  It doesn’t matter who you are or what you’ve done — there is room in that Closet.  I should know.

I used to be what the sinners call “out” and “proud.”  I dressed up for Halloween parades.  I sobbed in support groups and marched around for LGBT “rights.”  It got so bad, I even signed a petition for gay marriage.  I couldn’t get much lower.  Then, one day, in a public toilet, someone handed me a pamphlet.  That pamphlet was all about a man called J. Edgar Hoover — O praise his holy name!

You see, J. Edgar was one of the Down-Low’s only begotten sons.  He came to earth as a lawman, to spread the holy shame of Down-Low.  And after the Down-Low promoted him to head of the FBI, he became the lowest-down of the Down-Low homo ho’s that ever mo’d.

This pamphlet said that J. Edgar never stopped fighting evil.  He knew that all kinds of Communists and civil rights leaders and change-the-world nut-jobs with healthy self-esteem were wrecking this country.  He could feel their slimy, subversive presence sneaking in under his door, pulling back his covers, sucking out his bodily fluids.  So he spied on these subversives.  His piggy little all-seeing eyes were everywhere: on Albert Einstein and Martin Luther King — and on you and me, friends.  J. Edgar dwelt in a golden Closet and wrecked lives and had boyfriends and nice frocks to dress up in, and nobody ever found out.  Because J. Edgar believed in the Down-Low and felt its shame. 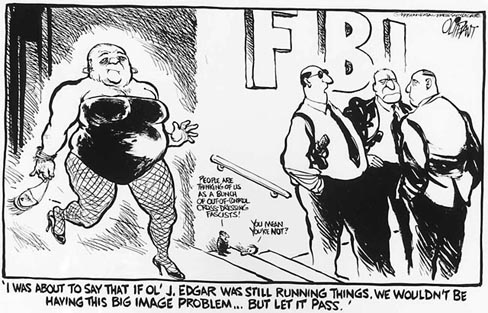 That pamphlet changed my life, friends.  I fell down, shaking and shivering in the glory of the Down-Low — and I saw the Dark.  Now, some folks say I was only having a seizure, but right then and there, I gave my life over to J. Edgar Hoover.

So let us pray for Ted Haggard, my friends.  Let us pray that Pastor Ted will find J. Edgar.  For, if Pastor Ted had only given his shame to Our Closet which Art in Heaven, his misfortune might never have occurred.  The second that dime-dropping wienie-wanking, homo hooker stepped out of line, the redeeming power of J. Edgar Hoover would have bugged his apartment, broken his legs, and sent him to a lifetime in the slammer.

So whenever you feel weak and scared and accountable, you have only to look to that bracelet on your wrist, at those precious letters “WWJD,” and ask yourself: What Would J. Edgar Do?

The Down-Low can save you, friends.  The Down-Low is that Inner Dad who chases you out of the kitchen and punches you when you cry.  It rips off your Bo Peep costume and gives you the homoerotic spanking you deserve.  Why, it’s the Down-Low that made America great.  It was there, causing us to hate and fear everything peaceable and non-Christian and non-White in ourselves, so that Americans, in the name of Freedom, could take this great land from peaceable non-Christians, and force non-White people to work on it.

The Down-Low abides with us now, even after the election.  It won’t let the subversives win.  It’s even with Pastor Ted.  For, if you check the Colorado election returns, you’ll find that the ban on gay marriage — along with another ban on domestic partnership — was passed.  We are, indeed, blessed.