Now that I have mastered the art of writing for social change, I have decided to become a famous literary agent!  Of course, before I open my own agency, I’ll need to practice editing.  Luckily, the right manuscript recently came to my attention, and I have just finished crafting this cutting-edge feedback.

Thank you for sending me your “Communist Manifesto.”  I regret to say it does not meet our publishing needs at this time.  However, your projection of a workers’ paradise achieved through global revolution is an intriguing idea and might, with a few revisions, be appropriate for some novelty-type venues, perhaps even Reality TV.  But first, we need to get it into grammatical shape.  For instance, you begin:

“A spectre is haunting Europe — the spectre of Communism.”

Unclear.  Do you mean “spectTER?  As in a ghost or wraithlike phantom of some sort?  If so, you’ll want to upgrade your version of Microsoft Word to one that includes a spell check.  If you do not yet have Word, it is quite easy to purchase, as Microsoft products are assembled at little or no cost to Microsoft by eager youngsters working 14-hours days in developing countries — they do this for you, Karl and Fred, so take advantage.

By likening “Communism” to a specter, you have employed a literary device known as “personification,” thereby creating a dimensional character.  Good first step!  But, going forward, could we make Communism a little less menacing?

Now, I know you mean to describe a way of life by which people embrace their humanity and live with dignity and justice in a classless, stateless society of shared joys, mutual labor, the final conflict, yadda yadda.  But that sinister, “haunting” thing brings to mind a top-down, totalitarian police state where it would be impossible to market an opus such as yours.  It is a known fact that the masses respond to happy, snappy brand names they can trust.  So let’s spin out a patented Communist trademark — the happy snappy way! 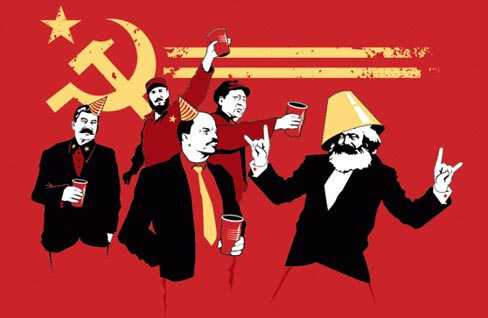 Assume, for the sake of marketability, that Communism is a white male.  A boy, in fact, with sincerity and glasses, in the tradition of Harry Potter — “Commie Potter,” if you will.  I see video games, websites, Imax, here.  “Commie Potter and the Hedge Fund of Doom.”  “Commie Potter and the Running Dogs of Imperialism.”  Kids will be able to double-click on an Evil Capitalist icon to see slime ooze out of its orifices, and they can learn valuable life lessons by guiding little Commie through the maze of dialectical materialism.

Or, for broader, more globalized appeal, you could embody Communism as a winsome, computer-enhanced animal, not unlike those of recent cinematic triumphs.  Instead of “haunting,”  Communism could, for example, boogie down the road on happy little feet, creating mirth and merriment wherever it goes:

“Vy are you laughing, Chava?  We haf lost our jobs und our baby has died of tuberculosis.”

“Oy Yankel!  Such a manifesto I just read!  See: ‘There is a penguin dancing through Europe — the penguin of Communism.’“

“Ach, so cute!  Laughing, we go now to the barricades, Chava!”

Speaking of the masses, Karl and Fred, you need a better handle on your audience:

“These laborers, who must sell themselves piecemeal, are a commodity . . . “

I know you want to help the workers, guys, but with language like that, how many actual workers are going to read this thing?  And, FYI, we don’t like to be called “workers” or “laborers” or even “employees” — we prefer to be called “consumers.”  As consumers, we are not “forced” to do anything.  As consumers, we are empowered to make important daily decisions about whether we will consume the GAP or Old Navy; Iraq or Venezuela; salmonella or E. coli; unaffordable health insurance or no health insurance.

And P.S.: isn’t being a commodity a good thing?  Everyone yearns to be a successful product — look at Hillary Clinton.  In fact, Karl and Fred, your faces on a few more t-shirts, lunch-boxes, and mouse-pads wouldn’t hurt your careers, either.  Basically, you need to lighten up, especially such writing as:

There you go with “the struggle.”  That’s your main problem: you see everything in terms of “the struggle.”  Relax.  Let a smile be your umbrella and let GO of the whole victim-thing.  Are you feeling better?  Smiling?  Good.

Now that you are smiling and relaxed, allow me to say that, as a LESBIAN, I feel TOTALLY OPPRESSED BY your patriarchal, HEGEMONIC, class-based analysis.  Why the hell can’t you straight white male Euro-centric pinkos accept Identity Politics?

Some day, people of all identities — and races and classes — will rise up!  And we will create a world where we acknowledge a soul in every human being, and not a competitor.  Where we try to preserve and not overheat the earth in a never-ending quest for disposable necessities.  Where no one feels shame for needing things, because, built right into our Constitution is the guarantee, not only of human rights, but also of the rights to food and shelter and healthcare.  A world in which our brave little penguin is not put into a gulag and left to die of broken heart by people who call themselves Communists.

This is the product you’ve got to sell, Karl and Fred.  So make with the re-writes.  Don’t be shy.  After all, you have nothing to lose but your book contract.